Suppose our data is a stream of pairs {IP address, User ID} and we want to identify the IP addresses that have the most distinct User IDs. Or conversely, we would like to identify the User IDs that have the most distinct IP addresses. This is a common challenge in the analysis of big data and the FDT sketch helps solve this problem using probabilistic techniques.

More generally, given a multiset of tuples with N dimensions {d1,d2, d3, …, dN}, and a primary subset of dimensions M < N, our task is to identify the combinations of M subset dimensions that have the most frequent number of distinct combinations of the N - M non-primary dimensions.

Suppose we have a stream of 160 items where the stream consists of four item types: A, B, C, and D. If the distribution of occurances was shared equally across the four items each would occur exactly 40 times or 25% of the total distribution of 160 items. Thus the equally distributed (or fair share) threshold would be 25% or as a fraction 0.25.

We define Most Frequent items as those that consume more than the fair share threshold of the total occurances (also called the weight) of the entire stream.

Suppose we have a stream of 160 items where the stream consists of four item types: A, B, C, and D, which have the following frequency distribution:

We would declare that A is the most frequent and B is the next most frequent. We would not declare C and D in a list of most frequent items since their respective frequencies are below the threshold of 40 or 25%.

If all items occured with a frequency of 40, we could not declare any item as most frequent. Requesting a list of the “Top 4” items could be a list of the 4 items in any random order, or a list of zero items, depending on policy.

When a stream becomes too large with too many different item types to efficiently process exacty we must turn to statistical methods to estimate the most frequent items. The returned list of “most frequent items” will have an associated “estimated frequency” that has an error component that is a random variable. The RSE is a measure of the width of the error distribution of this component and computed similarly to how a Standard Deviation is computed. It is relative to the estimated frequency in that the standard width of the error distribution can be computed as estimate * (1 + RSE) and estimate * (1 - RSE).

We define the set of all combinations of N-M non-primary dimensions associated with a single primary key as a Group.

Alternatively, if we choose the Primary Key as {d1}, then we can identify the {d1}s that have the largest groups of {d2, d3}. The choice of which dimensions to choose for the Primary Keys is performed in a post-processing phase after the sketch has been populated. Thus, multiple queries can be performed against the populated sketch with different selections of Primary Keys.

An important caveat is that if the distribution is too flat, there may not be any “most frequent” combinations of the primary keys above the threshold. Also, if one primary key is too dominant, the sketch may be able to only report on the single most frequent primary key combination, which means the possible existance of false negatives.

In this implementation the input tuples presented to the sketch are string arrays.

If we choose {d1} as the Primary Keys, then the sketch will allow us to identify the IP addresses that have the largest populations of distinct User IDs.

Conversely, if we choose {d2} as the Primary Keys, the sketch will allow us to identify the User IDs with the largest populations of distinct IP addresses.

Let’s set the threshold to 0.01 (1%) and the RSE to 0.05 (5%). This is telling the sketch to size itself such that items with distinct frequency counts greater than 1% of the total distinct population will be detectable and have a distinct frequency estimation error of less than or equal to 5% with 86% confidence.

Assume the incoming data is a stream of {IP address, User ID} pairs:

We are done populating the sketch, now we post process the data in the sketch:

If we want the converse relation we assign the UserID as the primary key. Note that we do not have to repopulate the sketch!

When the Group is printed as a string, it will output seven columns as follows:

Note: the code for the following study can be found in the characterization repository here and the configuration file can be found here.

In order to study the error behavior of this sketch a power-law distribution with a slope of -1 was created. The head of the distribution was a single item with a cardinality of 16384, and the tail of the distribution was 16384 items each with a cardinality of one. All the points inbetween were items that have multiplicities and cardinalities that would fall on a straight line plotted on a Log-X, Log-Y graph. This generated an input stream of about 850K (Key, value) pairs, which was input into the sketch and is considered one trial. The sketch was constructed with a target threshold of 1% and a target RSE of 5%.

Twenty such trials were run and the error distribution quantiles of the results were computed and is shown in the following graph. 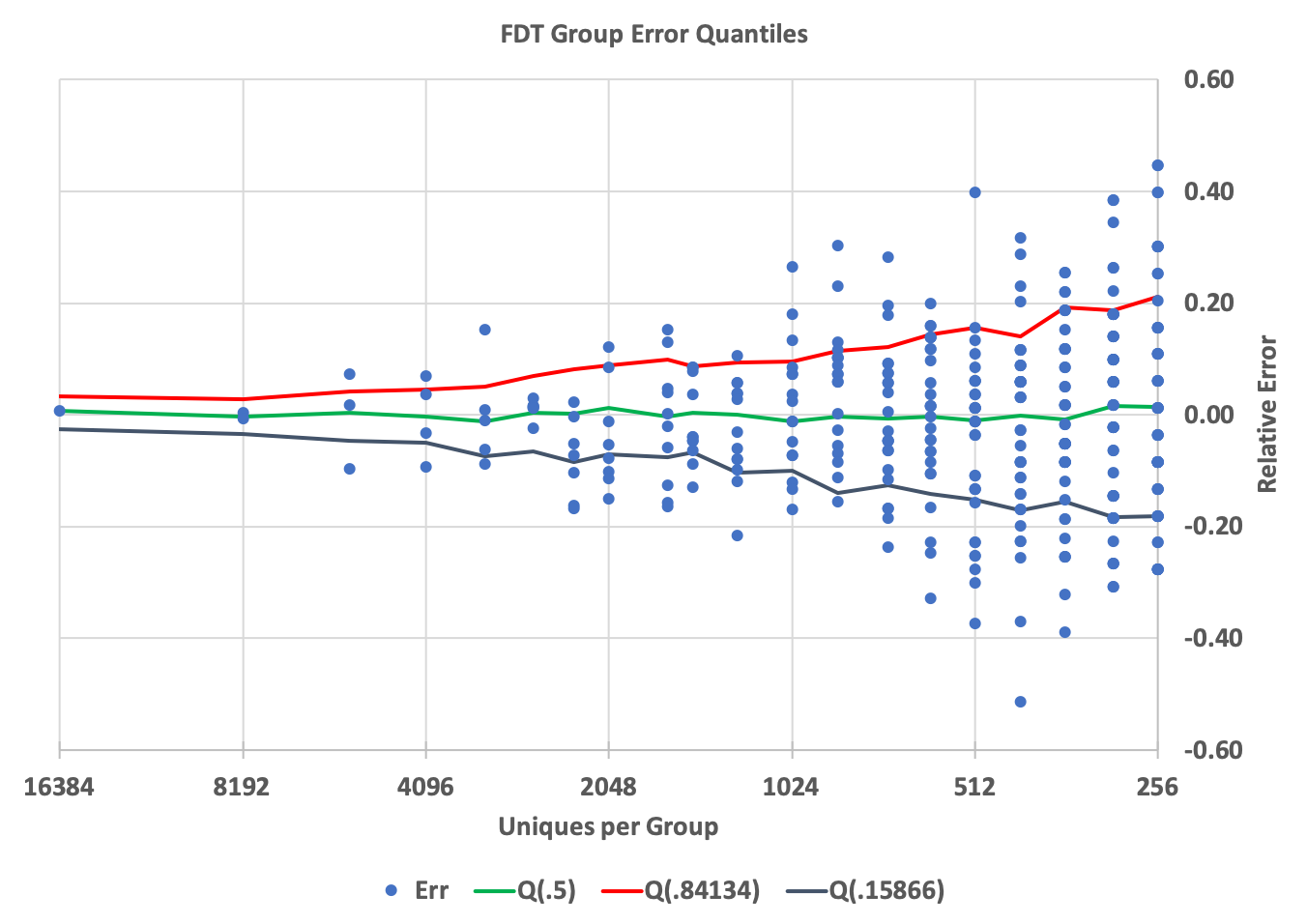 The X-axis is the true cardinality. Of the nearly 24K groups captured by the sketch of the input stream of over 100K groups this graph is a view of the top 500, which is more than enough to demonstrate the error behavior.

The Y-axis is the relative error.

The following table is the list of the top 10 results from just one of the trials. The Group class was extended to include more columns at the end which were useful for this study. (This was easy to do and does not require any special access.)

As you follow the graph to the right you are observing the error distribution as the cardinalities get smaller. Smaller groups have fewer samples from the sketch thus their estimation error will, of course, grow larger. What this graph demonstrates is the the error properties are well behaved and what one would expect from this sketch.